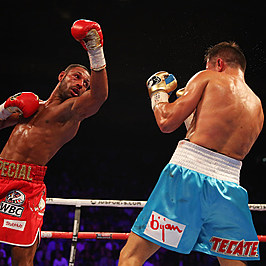 I'll be honest.  I felt upset was in the air.  And for the first three rounds I thought the wind was moving in the right direction.  Then, round five, a flash of white as the towel from Kell Brook's corner was waved and then thrown into the ring.

The fight was a beautiful back and forth between a huge underdog, Kell Brook, who had moved up to weight classes to fight a man that every big name boxer refused to fight, Gennady Golovkin (GGG).

I was unhappy with the ending, but like walking out of a bad movie, sometimes you don't need to see the end.  Sometimes you just feel it.  I'll accept that Brooks corner probably felt something only those who trained and lived with Brook could feel.  I imagine coaches know their fighter like they know their significant other, can read the signs and understand  the unspoken.

I don't want to see a fighter hurt.  I just want to know FOR SURE.

What I feel now, having retired from screaming at the screen with every combo Brook threw and every bomb Golovkin landed is that Canelo Alvarez needs to fight GGG.  There is no other fight worth mentioning (actually, Erislandy Lara would be an amazing fight, and I believe he beat Canelo, but that won't sell tickets like the Mexican Wunderkind).

Canelo has been ducking GGG for over a year now and has maintained his status with every mandatory fighter he destroys, but the fans need to see it, if not the fans, then do it for me.  ;)

Canelo cut massive weight to meet Floyd Mayweather and only those blinded by the hype thought he would stand a chance in hell.  Canelo was humiliated but he was too young, not technical enough and not fighting in his comfortable weigh class.  But Canelo and GGG is a different story.  They could exchange clothes, they could wear each other's shoes, and they could exchange their belts and their legacy.  Canelo is worried about this, but worry is not in GGG's vocabulary and it wasn't in Marvin Hagler's, Mike Tyson's, or Carl Froch's either.

Someone is faking it, and while both GGG and Canelo will eventually fight everyone but each other, they are destined to meet sooner than later.  The betting line by fans was GGG as the favorite, but I think if Canelo watches the fight he may see something in Kell Brook's defiant performance.  I think Canelo sees a chance.  I hope he takes it.