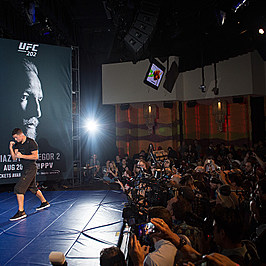 Conor McGregor and Nate Diaz have a very real relationship, in their mutual respect and their outward dislike for one another. When McGregor taunted Diaz prior to the first match, saying Diaz “looked like a scared Gazelle”, it was his attempt to enter Diaz's head as he had all the fighters he had faced previously. Only with Diaz, it did not work.

Diaz doesn't operate from the same arena of ego and 'legacy' as many UFC fighters do. His desire is simply to fight and his taunting is most often left inside the cage. There was a point, in round two, when Diaz landed the infamous “Stockton Slap” (a slap to the face) on McGregor and the reaction from both fighters revealed who the true alpha was in the fight. It was not long after that McGregor shot a desperate takedown on the black belt jiu-jitsu wunderkind Diaz that he sealed his fate, the gazelle having outlasted and out fought the brash Irishman.

So while the first build-up to the fight was the equivalent of two people talking tough on the internet, now that they have fought each other, the press conference's and public engagements have a noticeable air of tension. One that we will see in the weigh-in and almost certainly during the fight.

The difference will be in confidence now. Conor was invincible, unbreakable and quick witted when he first fought Diaz. His breaking down at the press conference Wednesday has shown that there is doubt, there is emotion that was not there before when he rapped clever insults and self-aggrandizing statements.

Before the first match, Diaz said “he may just knock me out and embarrass me”. Before the first match McGregor said, “I will toy with him...I will tease him... I will beat him however I want.” They were both wrong, only one lost something in their prediction. Something some people can't recover from. We will see Saturday.