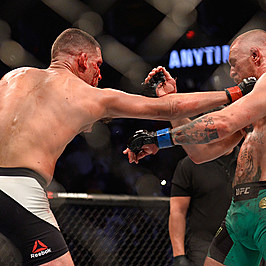 It was right as I got up to go grab a beer, as Anthony Johnson was making his walk out, that it struck me and I made an announcement to my friends who were watching the fight with me.  "Glover Teixera is too sloppy, Rumble is gonna end this one quickly."  Within a minute, Teixera was on the ground, unconscious, fighting the referee.  What made this realization interesting was that just prior to the fight, I was talking about the myriad ways in which Teixera could possibly win.  Looking back now, I see that it was filling up time, the endless second guessing that comes when fan's gather around and fill the time between bouts with MMAmath.

The truth is, MMA is one of the only sports where it is always bottom of the ninth, where the fight can be decided at any given time.  This is where I believe MMA transcends other sports.  Time is not guaranteed.  A football team can be down twenty points, but that last quarter is guaranteed to them and they can make a miraculous comeback or slog into the inevitable.

For the main event, Conor McGregor vs Nate Diaz, the variables were much greater.  The possibilities for victory were almost completely reliant on intangibles and the incalculable mental fortitude of either fighter.  In my prediction, I made the claim that McGregor would lose once his composure went out the window, that he would be forced to fight with ego or muscle memory.  I made the claim that his artistry resided in his physicality, his technique, and his unorthodox striking.  I didn't believe he had it in him to embrace patience, to not get emotional.  He did, and therefore won.

Nate Diaz's achilles heel were leg strikes, I knew this and McGregor clearly did as well, opening up in the first frame with kicks to the lead leg.  Diaz didn't adapt to this, which interestingly was not to his detriment.  By the end of the third round, those kicks didn't matter, McGregor was up against the ropes and it looked like my prediction of a fourth round TKO was gonna be correct.

But the bottom of the ninth lasted a little longer than that, McGregor came back with an energy that could only be seen as the manifestation of the force of will.  He fought back against what appeared to be encroaching time, and extended his chances into the fifth round.

This fight was nothing short of a war of attrition between two fighters with endless reserves of heart, hunger and willpower.  While I do not agree that McGregor was the clear victor in three of the five rounds as the judges scored it, I believe that the only way we could have seen something definitive in this fight would be if it lasted past the time frame of twenty-five minutes.

This highlights the second great difference between Mixed Martial Arts and other sports.  Time is sometimes not enough, that the way in which to view an epic fight such as last night's main event is to imagine the sixth or seventh round.  Sometimes the best way to understand a close fight is to watch the next one, whomever their opponent may be, and note the changes. Fortunately for Diaz and McGregor fans, a trilogy is inevitable, and most of us are already envisioning it right now.