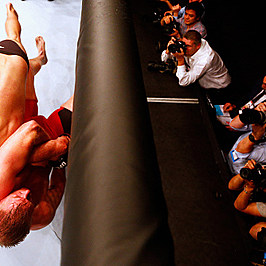 How fighters react to adversity is the most illuminating part of the fight game.  We can see Julio Cesar Chavez's endless rallies at the end of fights and see how 'heart' manifests itself in combat sports as a real, visible factor.

Similarly, watching how a fighter recovers from a loss in their follow up fight is as interesting.  Often times a loss will manifest itself in a desire to prove oneself in a dominating fashion, to wipe clean the stigma and memory from fan's minds.  However, this often results in a carelessness that turns that one loss into a losing streak, which is the equivalent of a existential crisis in combat sports.

All three of the victors on the top of the UFC Hamburg card were coming off losses, and their performances revealed the specter of loss in a very clear way.  Ryan Bader's patience and calculating stand-up game was the clear factor in his win over Ilir Latifi.  Previously, Bader was known to rush into opponents, and in desperation had a chance to get caught and knocked out in a careless manner.

Alexander Gustaffson is the #2 ranked Light Heavyweight, despite coming off of two losses in a row (albeit to the #1 and #2 ranked fighters).  Gustaffson had entered a losing streak, and his desire to get back into title contention had blinded his fight IQ, making him desperate and careless in his fights.  The ferocity in which he tried to get himself out of the hole that he had dug in his loss to Anthony Johnson had only made the climb that much steeper, resulting in a follow-up loss to Daniel Cormier.

However, in his fight against Jan Blachowicz, Gustaffson showed no attempts to prove anything to the fans or pundits.  Instead of opting for a more exciting, stand-and-bang fight, he took Blachowicz down and grinded him to a pulp for much of the fifteen minute fight.

There is the Mike Tyson curse, as I call it, in which a fighter aims to please others rather than fight for themselves.  We see it in Tyson's later head-hunting fight style, a continual attempt to win back the fear and awe of his Iron Mike days.

Nowhere is this better seen recently than in Jose Aldo's return fight against Frankie Edgar.  After following a 13 second loss to Conor McGregor, many figured Aldo would come out with a vengeance, throw caution to the wind and attack Edgar in the hyper-aggressive style Aldo had in his younger days.  But Aldo didn't.  What we saw was an Aldo who methodically destroyed Edgar, through patience and technique, in a fight that was as frustrating for the "just bleed" UFC fans as it was for Frankie Edgar.  Aldo provided a masterclass, in how to face the specter of loss and how to out think, out fight and outlast it.