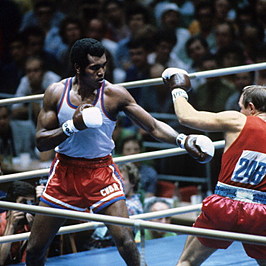 1. Cassius Clay: Known as Muhammed Ali by many, The Greatest by others, Ali began his boxing career as a relatively quiet  boxer whose understated footwork at the time and unorthodox striking techniques won him the gold medal at the 1960 Rome Olympics. Two of his greatest rivals, George Foreman and Joe Frazier, were also Olympic boxing gold medalists.

2. Teofilo Stevenson: The greatest virtually unknown boxer to ever compete at the highest levels, Stevenson won gold at three consecutive Olympics ('72, '76, '80) and was for many the ultimate challenge to Muhammed Ali. The Cuban Stevenson, however, never fought Ali as professional boxing was illegal in Cuba. Despite a million dollar offer, Stevenson was never interested. Just a cursory glance at Stevenson footage shows us his sublime, technically perfect style and imagining him against Ali is one of boxing fandom's greatest past times.

3. Wladimir Klitschko: One of the most dominant heavyweight fighters of the past decade, rivaled only by his brother Vitali, Klitschko won the gold at the '96 Atlanta games. Undefeated for over a decade, Klitschko recently lost the championship to Tyson Fury. Their rematch is scheduled for October. After Fury and Klitschko settle the score, two other medalists wait in the wings: Anthony Joshua (Gold '12 London) and Deontay Wilder (Bronze, '08 Beijing)

4. Floyd Mayweather Jr.: Both self-proclaimed and fan affirming “The Best Ever”, Mayweather was a bronze medalist in the '96 games in Atlanta. There is a huge asterisk by this designation, however, as most familiar with the fight viewed it as a complete robbery, with charges of corruption. One judge in the competition, Bill Waeckerle, resigned as a federation judge after the decision in protest. Oscar De La Hoya, one of Mayweather's greatest rivals, won gold (and rubbed it in Mayweather's face).

5. Andre Ward: Along with Stevenson, Ward is this humble writers pick for one of the greatest ever to not get the respect he deserves. Winning gold at the '04 Athens games, Ward has gone on to have an undefeated boxing career, his only setbacks being issues with management. This September, Ward will fight Sergey Kovalev, in what is the most exciting fight since Mayweather/Pacquiao was in talks back in '08.

This list can go on, and surely a fighter at Rio will be added in due time. For now, I leave you with a few other medalists whom you will recognize:
Guillermo Rigondeaux
Pernell Whitaker
Roy Jones Jr. (Robbed)
Vasyl Lomachenko
Sugar Ray Leonard
Michael Spinx
Leon Spinks
Lennox Lewis