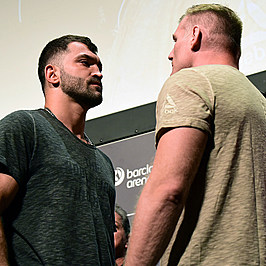 There is a common refrain in the fight game, "styles make fights".  This becomes evident as you watch more fights but there are always intangibles that change, modify and skew the fight come fight night.

These tangibles aside, this Saturday in Germany there is a very clear case of styles make fights and it is one that hearkens back to the original Ultimate Fighting Championship in 1993.

When the UFC first began, it was a spectacle with a novel idea: which styles of combat are most effective?  Pitting styles together we quickly began to see that certain styles (SAFTA, Karate, Akido) were laughable.  Slowly the MMA fight game reduced itself to two primary styles: Striking and Grappling.  Within both of those disciplines is a wide spectrum of focuses that show their efficacy in different ways.

But with the big two, Striking and Grappling, is where we find the most drama.  the key is who can take the fight to their wheelhouse.  A striker will win if he keeps the fight standing, the grappler will win if he can get it to the ground.  The key is in the transition, where many fights are determined, the area between styles.

When Andrei Arlovski faces Josh Barnett, we will see a classic example of striker vs. grappler.  Arlovski could very easily tag up Barnett within a round but could as easily be held down and submitted.

The area between styles with these two fighters is especially interesting.  Barnett can look like a fish out of water without the ability to get a fight to the ground.  Arlovski can look downright amateurish off his feet.  However, these fighters are both veterans and have added new wrinkles in their game.  For Arlovski, his takedown defense has become very formidable, while Barnetts boxing fundamentals are solid.

So we have a superb, Freddy Roach trained fighter, Arlovski, against a high level catch-as-catch-can grappler, Barnett.  Like many great fights, their particular skills will not matter as much as their ability to impose their will.  This fight will boil down to that area between styles, and who has improved the most in that arena.  It need only be a fraction, but in the fight game, a fraction creates a rift that expands exponentially as fatigue, time and frustration set in.

My prediction is that the area between styles will be in limbo through much of the fight, and while Barnett may not take Arlovski down, he will be able to clinch him up against the cage and wear him down before winning a unanimous decision.