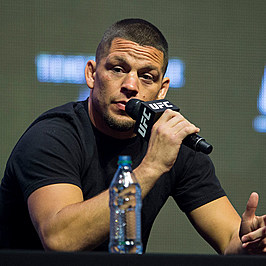 Despite winning in a dominant manner at UFC 196, Nate Diaz is still not getting the love from fans on the street.  Much of it is due to the silver-tongued Conor McGregor, who rose quickly through the ranks with an unbridled trash talk game and an unorthodox fighting style that culminated in him winning the UFC Lightweight Championship from long time title holder Jose Aldo, at UFC 194.

The Diaz-McGregor rematch is scheduled for August 20th, and while the press junkets have been less intensive (as both fighters have requested more time to focus on training for their opponent) the hype surrounding the fight has risen to new heights.  Fighters of both fans are doubling down on their bets, and are entering the rematch much like the fighters- with an understanding that there is no sure thing in MMA.

Recently, Jimmy Kimmel had both fighters on his show and allowed their disparate definitions to expand on what this fight represents.  It is more than mere styles, it is a clash of technique and personality, ego and self-awareness, played out before millions of viewers.

In an interesting segment, Jimmy Kimmel had Conor McGregor fans elucidate how McGregor will win the rematch, with Diaz watching all the while.  Then, right when they were in the midst of their declarations on how McGregor will win, Kimmel had Nate Diaz walk out from a building and confront them.  The results were fun to see.  Check it out.