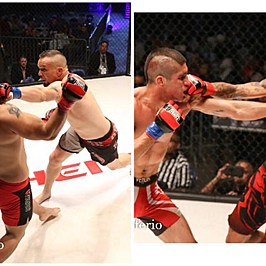 I visited the Red Spider fight team before their Tuesday boxing night, where round after round a fighter stood in the center and proceeded to face a refreshed, recovered killer until their hands, feet and reflexes betrayed them.  After their turn in the middle, they got a minute to rest and proceeded to dish out what they had taken.  Before this brutal hour of exhaustion, fatigue and uppercuts I had a chance to ask what their predictions were for the UFC 203 Main Event: Champion Stipe Miocic vs Alistair Overeem.

Randy McCarty- I think Overeem by KO.  I have trained and sparred with him and he has dangerous striking.  Critics consider him the underdog, and so I am picking Overeem by upset.

Alex Estrada- I'm picking Overeem.  I think that his kickboxing is on another level.  I am gonna say third round TKO.

Adam McGurk- It is hard, i like both.  But if i had to make a prediction I would say Overeem by TKO.

Johnny Guillen- I haven't really seen Miocic that much, to be honest, so I will go with Overeem.

Darrill Schoonover- (Red Spider Coach, UFC Vet) I'm gonna go with Miocic.  Overeem has been knocked out a few times, and i think Miocic will find his chin.

And now, your humble writer:

This is a heavyweight fight, which means everything can change faster than our eyes can process it.  Mistakes are exploded, exaggerated.  You cannot blink.  Though Miocic is the better wrestler, it is of no advantage in this fight. Miocic's method of take down involves grinding and getting close in the clinch.  Problematic with this is that Overeem is the king of the clinch, and his knees change both the complexion and of the fight and the opponents rib cage when they attempt to close the distance.

This fight will be decided by who can land the big punch first.  Both fighters are eminently hittable, though as Darrill Schoonover pointed out, Overeem has a suspect chin and has been knocked cold out by lesser fighters many times before.

Stipe can get careless in the middle of a round.  In this carelessness he neglects fundamentals and ends up getting him hit by lesser fighters.  He simply cannot do this with Overeem.  While Overeem's cardio drops substantially after round three, it won't matter in a fight that will undoubtedly be decided via striking and in that regard Overeem has more tools: bludgeoning knees, liver kicks, check hooks and counter rights.

This fight will be decided by carelessness vs onset fatigue and which one arrives first.  I see carelessness arriving early in round two, where Miocic will catch a dipping hook and be TKO'd against the cage by Overeem before a hometown crowd.