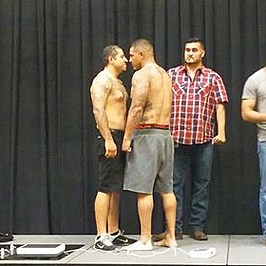 Two El Paso Heavyweights are fighting each other tonight in Las Cruces at the Southwest Brawl 5 at the Las Cruces Convetion  center.

John Romero, representing 12th District and Danny Grado, representing Red Spider MMA are two of the toughest, most dominant fighters out of El Paso.  They are also friends.  Romero and Grado have trained with each other and have known of each other for many years.  That said, both have stated that none of that matters once they step into the cage.

Each fighter has knockout ability and strength for days.  While it may suck that two El Pasoans are fighting each other rather than taking on other cities, it will give other fight gyms a taste of what El Paso has insofar as toughness, skill and a brutal focus in the toughest, most challenging sport in modern times.

Las Cruces is not that far, and there is still time to make it out there.  I will provide some afterthoughts on the whole affair and give you some personal insight from each of the fighters.  Stay tuned.