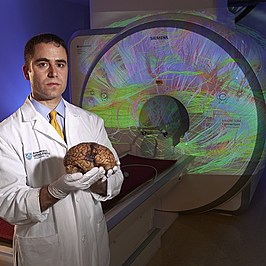 Chronic Traumatic Encephalopathy (CTE) is a degenerative brain disease often associated with Hockey, Football, and Professional wrestling.  It is often the result of repeated blows to the head over years of competition.

While the NFL has made an attempt to cover-up the pervasiveness of this disease in their sport, the lack of CTE was often a bragging right of MMA.  While MMA may seem the more dangerous sport on paper, in actuality it has had a near perfect record regarding deaths and clear examples of long term illnesses.  Until now.

Earlier this year, Jordan Parsons, a young MMA fighter in Bellator was the victim of a hit and run and passed away soon after.  Just this week, however, doctors released information indicating that Parsons was suffering from the early onset of CTE.  If true, this would be the first reported case for MMA, the sport.

While no one should be surprised at the realization that beating the hell out of one another may cause problems in the long run, MMA has mostly had a clean record and hopefully some adjustments (forced retirement, training modernization) can help fighters for the long run.