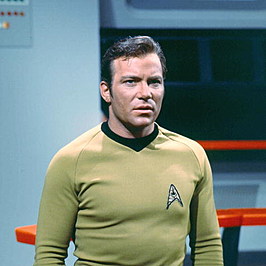 Many people would argue that Television has had a bad influence on society.  From glamorizing degenerates, glorifying vacuous lifestyles, and making role models of divas and criminals, the net effect has been pretty noticeable in how far afield we have gone from issues that matter, to scripted drama.  None of these influences have been as detrimental as the fight style of one James T. Kirk from the first Star Trek series in the sixties.

Somewhere, someone has attempted a Vulcan death grip on a bully only to find himself waking up twice that day.  While Vulcan fight techniques can be easily debunked as fiction, Captain Kirk has had a longer lasting impact because of his "heart" an his being a human.

However, as can be seen in the fight scene below, Kirk's fight fundamentals are horribly dangerous to adopt.  He continually squares up to his opponent, leaving him one touch from being thrown off balance (which Gorn does repeatedly in this scene).  One should always have their feet spread apart and never lined up.  This allows better balance and more efficient lateral movement.  Couple this with a side-on stance and you limit the target that is your body, demanding punches thrown your way have a certain amount of accuracy.

As far as offense, Kirk throws a two handed punch that physically has no torque, though the target of the kidney is a good idea, without the proper turn at the waist, there is not enough force garnered to do anything but tickle Gorn.  He follows this up with a combo to the shoulder (?) that does nothing but allow Gorn to turn and face him.

Soon after a kick is thrown, with no waist rotation, no spin on the ball of the feet and Kirk's body bends with the kick making whatever force even a crappy kick could deliver completely null and void.  Gorn throws him again.

The fight soon devolves into throwing stones after Kirk runs away from all those horrible fight techniques.  In his mind, he views the Gorn as an impenetrable foe in hand to hand combat.  Little does he know that Gorn's toughness is a direct result of horrible fight fundamentals that guarantee no power with any of their shots.

Luckily, Kirk has an improvisational, never-give-up style.  Realizing he cannot possible defeat Gorn with fisticuffs, he builds an IED from flint and desert debris and blows Gorn into the ether.  While the whole scene is fantastical, we have to remember that Star Trek was a science fiction show and nowhere is that more evident then in the hand to hand combat.