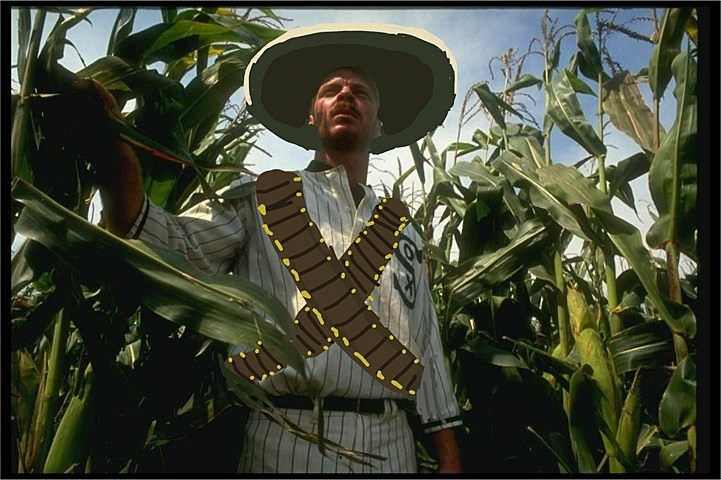 "...Ohhh, people will come, Ray. People will most definitely come."

Truer words were never spoken by a fictional character.

That was Terence Mann, as played by James Earl Darth Vader King Jaffe Joffer Mufasa Jones, in the 1989 baseball fantasy "Field of Dreams"; the flick where Kevin Costner plays a man who listens to the voice in his head and builds a baseball field in a location unlikely to draw fans.

Hey, cornfields in Iowa, a bullet's throw from Juárez -- it's all the same. Except one ballpark featured the ultimate fantasy team and the other might have problems with blowing lead when the wind is coming in from the south.

This might sound like I'm against building a baseball park in downtown El Paso. I am not. Provided that affiliated baseball can be guaranteed, it's the best idea yet for a lynchpin around which downtown revitalization can rally.

It's all about the downtown tax base. That's what we keep hearing from progressives like Veronica Escobar, anyway.

Stores for pompi jeans and certified Rollax Watch dealers are great and all, but they probably don't make enough in sales tax to collectively give the city parks department enough to pay for a bottle of Round-Up.

Sure, you might be happy finding a bootleg DVD of the new blockbuster that just premiered in the theaters at a downtown flea market. But not only will you be disappointed when you see silhouettes of the full-bladder shuffle at the bottom of your screen, you won't have generated enough in taxes to power the 40-watt bulb at the back of the tent where you bought the thing.

Right now, the well for our city and county is dug deeper in our own homes. We're worth more staying in -- which might be fine for some people -- but not for most people, especially if we shouldn't have to be shouldering the bulk of the tax burden.

Positive: cement used to build arenas has been proven 100-percent more effective in stopping bullets than the smell of peanuts and Crackerjacks at the old ball game.

Negative: sure seems like we've been talking about this downtown arena thing since the day after John Wesley Hardin was buried.

Positive: anchor tenants like a semi-pro basketball or hockey team would play enough home games to keep the lights on.

Negative: yeah, everyone will be flocking to NBA Developmental League games with the UTEP Miners playing two miles up Mesa Street.

If it can't outshine the Miners or give El Paso what it doesn't already have, let's kill the arena talk.

Plus, when it comes to the other big thing you do at arenas, all UTEP has to do to take any big concerts away from a hypothetical downtown palace is lower their prices for show promoters at the Don Haskins Center.

Notice how many good rock shows there are at the El Paso County Coliseum these days? Why do you think that is? We all have images of the giant concerts packing out an 18,000-seat arena, but that's not the reality here. A 5,000-seat arena with 2,000 more on the floor works just fine for a LOT less money.

If promoters really wanted bigger, they'd already be at The Don or the Pan-American Center.

I have an idea for what I think would be even better than baseball, but that's a different column altogether.

If the money and the will is there to create a new ballpark in El Paso -- and it looks like there really might be -- bring it. It's not even a quality-of-life issue as much as it's part of a business plan that has worked for many other cities already.

As for the stray bullets, if you can't beat the rap, join it. Minor league baseball games have already become open-air theaters of topical parody, so why not?

Instead of quarter hot dog night, call it "Make-The-Vendor-An-Offer-He-Can't-Refuse" night. Law enforcement could collect money for their charities by writing tickets unless they get the right "donation". And let's hear it for Chapo Guzmán bobbleheads to the first 1,000 fans!

Look, the problems south of the Rio Grande aren't going away anytime soon. Point being, why should it stop any of us from living and planning, regardless of which side of the border we're on?

Stopping the terror that grips Cd. Juárez everyday should be on our minds, but the best way forward is its own separate issue, and possible solutions aren't being allowed enough oxygen in our national debate right now.

One thing is for certain: bunkering down and staying in is the wrong answer to every one of our problems in this city. We should strive to create more reasons not to.

And, didn't you know? Of all the ugly ways to go -- fires, shootings, poisonings and accidents -- almost half of all fatalities occur at home.

Get out while you still can! Play ball!