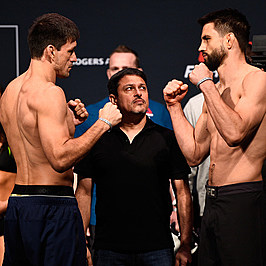 For those who have yet to have caught the MMA bug,  FOX has free fights tonight to give you a taste.  Turn your television right now and you can watch some of the most exciting fighters throw down in the octagon.

Paige Van Zant, who recently made it to the semi-finals of Dancing with the Stars is fighting for the first time since her loss to Rosa Namajunas.  What you have with Van Zant is a female fighter with grit that will make most men feel insecure.

Following her fight we get to see Anthony Pettis take on Charles Oliveira.  Pettis was the former lightweight champion.  Known for his surgical striking and outlandish unorthodoxy (jumping off the cage in the WEC to land the "Showtime Kick" against Benson Henderson).  While Pettis has had a string of losses, a loss in MMA does not hold as much weight as boxing.  It is a sign of a warrior to have lost, and their return from a loss is one of the most interesting aspects of Mixed Martial Arts.  What you see from fight to fight is a slow shedding of ego and hype that leans a fighter out metaphysically in a way that is tangible to see.  Against Oliveira, Pettis has a tough test.  Oliveira is a grinder, who will seek to pressure Pettis and keep him out of striking range.  This is Pettis Achilles heel, and we will see how he responds to it, knowing that it is what caused his last loss to current lightweight champion Eddie Alvarez.

The main event is a guaranteed war between Carlos Condit and Demian Maia.  Both are coming up through the rankings after having peaked.  The ramifications of this fight are immense.  Condit may retire rather than work his way through the ranks again.

Interestingly, Condits recent fights have showcased a completely unorthodox training style, focusing on movement and balance.  His victory over Thiago Alves was a masterwork, which opened up the spectrum as to the possibilities and variables in MMA in a new, interesting way.

Maia is emblematic of a fighter who began as a one dimensional fighter (World Class Jiu Jitsu artist) into a more well-rounded fighter since his championship loss against Anderson Silva.

This main event will be decided by cardio.  If Condit can outlast two rounds against the lethal Maia, he has a shot as Maia's cardio is often suspect.  However, should Maia get him to the ground, we may very well see how deep waters are defined in MMA, as maia often seeks to take his opponents down and drown them on the mat.

Regardless, it is a free fight, and presents an interesting variety of fighters and styles.  For those who are not convinced of the unique stylistics of MMA, a free fight on FOX is a perfect primer.