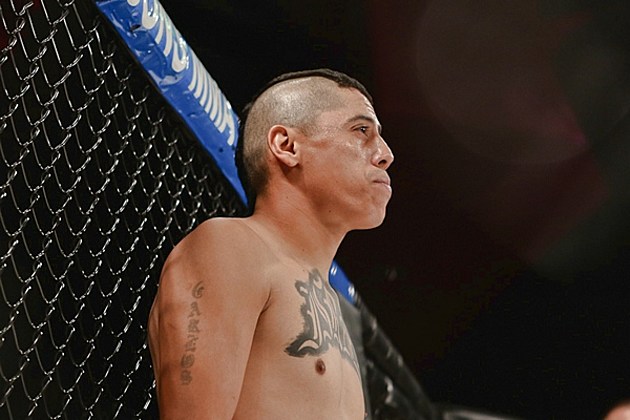 “I feel I like I am running out of time, like there is not enough time. I try to fight as many fights as possible. If I'm not injured, I'll go again next weekend.” - Johnny Guillen

There are signs: the skewed nose, the scar tissue above the eyes and the eye contact that comes only when he is speaking directly to you. Johnny Guillen has all the markings of someone who has sought what many avoid or watch comfortably from their couch and its many escape routes.

Guillen's calmness is a result of fights and testing oneself. It is the sum of losing after making sacrifices many only resort to on doctors orders – the weight cuts, the exercise, the diet, the discipline. A fighter pro-actively enters the arena most people only enter in emergencies or having hit rock bottom. To train twice a day, to face a symbolic death only prevented by a referee, is to thrive where many fear to tread.

“I was never an aggressive person. I had scuffles but never anything where someone would look and say 'that kid is a fighter” Guillen said. He saw a flyer for Darrill Schoonovers Red Spider gym and showed up, and has been showing up twice a day, turning pro after 3 years and fighting amateur the whole while.

“And now I feel comfortable in the ring, and when I'm not in the ring I am with my friends at their fights. I'll go out and play pool sometimes, but normally I don't have the energy to go out anymore.”

This is what separates fighters from the voyeurs. It becomes a brotherhood of men who have, like military vets, seen something others have not and relate in a deep way.
Phillip Schoonover, who along with Darrill Schoonover has been coaching Guillen since day one agrees.

“We started as training partners, and I became his coach. I consider everyone on the team my friends, not my fighters. Johnny has great conditioning, heart and ability to think in tight situations. He is tough and wants it. Johnny pushes the pace, doesn't let you breath, but has technique behind it all, which separates him from simply being a brawler. I have seen tape on his opponent and it is gonna be a tough fight. His opponent has a good right hand and hook and is undefeated, but all of Johnny's recent opponents have been undefeated so it is nothing new for him.”

Guillen doesn't watch tape of his opponents. It doesn't matter who is in the ring with him. He lets his coaches Darrill and Phillip watch the tape, conceive the game plan. “I know my opponent comes from a fighting family” says Guillen, “but that is all. I worry about my skills, my plan. I don't get into head games like other fighters. That is not me. I have seen the head games affect others and whatever one needs to get them into the fight, that is fine. I don't need motivation. I am there to knock your head off.”

Guillen says he is his own worse opponent, critic. When the fight doesn't go in his favor, he trains harder and learns more. “Losses last much longer, but they teach you much more.”

I ask if there is anything a regular person can experience that can simulate a loss. “There is nothing to compare it to. It is crushing. All your sacrifices and expectations and it doesn't happen. All you learn is that you can never know if you will win or lose but when you do lose, all you learn is that you want the win back.”

In his short career, Guillen has never stopped, even with a loss or with the glory and ego boost of a win. He looks up to the great Mexican fighter, Julio Cesar Chavez, who had over 100 pro fights in his career. “He is who I think of when someone says 'great fighter'.” Twice winning regional Golden Glove championships and making it to the State Finals, fighting Mixed Martial Arts and boxing; like his fight style, Guillen doesn't stop.

“This next fight will be fun”, says Guillen. “It is Duke City vs Chuco Town and that always makes for a great fight.”

It doesn't phase Guillen though. “I have fought so much, I have adjusted to the noise.” What he hears are his teammates there in his corner, and echos from the weeks of preparation.

Darrill Schoonover, owner and trainer at Red Spider, emphasizes the camaraderie. “Johnny Guillen has been with me since my Red spider grand opening back July of 2011. Since that day he asked me if I was going to be the one training him and how long before he could go pro. I responded with yes and 3 years if he busts his ass. Since then Johnny has always been in the gym. He trains in the morning and at night six days a week and only because I make him takes one day off a week. He's an athlete and great role model for people of all ages.”

This respect and egalitarianism amongst teammates that bludgeon each other and test limits in training everyday is what echoes with me as I write this. While the minutes in the cage are solitary, and a fighter has no one to fall back on in the ring, you come to realize that it is a team sport. The team and brotherhood is there, but unlike other sports, you can't see it. However, if you want to catch a glimpse, you have to go see the fight yourself, imagine the feel of the gloves, and in the exhaustive tension and drama of the fight, try to see if that rapid heartbeat is something you would chase.

Filed Under: boxing, el paso, Johnny Guillen, Red Spider MMA
Categories: Boxing, Events, Local / El Paso / Texas, MMA, News, Sports
Comments
Leave A Comment
El Paso’s Michael Myers is Back And He’s On The Hunt For A Job
El Paso’s Own, Khalid, Announces He’s Going on Tour With Ed Sheeran
Family Friendly Trunk-or-Treat Events Happening Across El Paso This Month
Flashback To When Grammy Winning Rapper Coolio Made A Few Stops In El Paso
Enjoy A Coffee At These Local Coffee Shops Ranked as Yelp’s Best in El Paso
Missing a Great Man “The Sandman” Who Styled the El Paso Streets
How Would You Excite an El Pasoan In 5 Words or Less?
Kendra Scott El Paso To Hold Fundraiser for Family of El Paso Man Killed In Train Derailment
An El Paso Youth Football Game Turned Violent And It Was All Caught On Video