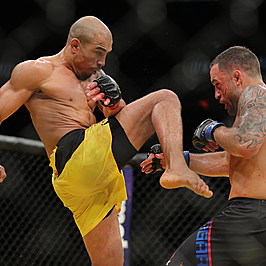 While UFC fighters are quite possibly the most conditioned, well-rounded athletes in all of sports, the UFC is first and foremost a business and in that regard operates with quarterly profits in mind.  The long game is fools gold in the fight business.  Liston took a dive against Ali and never lived long enough to avenge his "loss".

Jose Aldo, despite being undefeated for ten years, lost to Conor McGregor and never had his chance at a rematch.  He has been promised it many times by Dana White, but when the UFC's first show at the famed Madison Square Garden was announced, McGregor was booked to fight Eddie Alvarez for the lightweight title.

The UFC is adamant about making McGregor a simultaneous two-division champion, even if that means keeping him from defending one title until he has another.

What this does is leave great fighters in limbo, such as Aldo, who may very well be one of the greatest pound-for-pound fighters in the history of mixed martial arts, or combat sports in general.

So it is sad to see Aldo ask the UFC to cancel his contract.  He has stated he no longer wishes to compete in the circus, and the higher ups obsession with money has drained his motivation to fight anymore.

McGregor, however, calls the shots.  McGregor could grant Aldo the rematch Nate Diaz granted him after McGregor tapped out in the second, but he won't.  McGregor doesn't believe in the long game either.

In ten years McGregor will be a B-level actor, making Steven Seagal movies, television appearances and clothing commercials.  He will compare himself to Ali, as will the media. He will probably talk about being the first two-division champion.

Aldo won't have to talk to anyone.  He won't have to remind anyone.  If he retires, he will be the greatest fighter to have walked away from the business and the money while every other fighter chases the ring until the doctor tells them to stop.

John McCain once called MMA "human cockfighting".  What he and other detractors failed to understand is that MMA is the epitome of the human ability to choose.  We see fighters choose against every instinct to give up, and we see fighters choose to go out swinging.  Aldo shows us another choice, the choice to opt out and walk away.