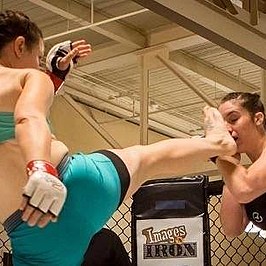 Interviewing fighters is one of the more fascinating inroads in understanding what makes the fight game a study in the human condition.   Watching Nate Diaz fight Conor McGregor tells me something about the world we live in and about our world-views, goals, dreams and beliefs.

I spoke to Leann Christensen, a local fighter from the fight camp 12th District, about the ideas that percolate before, during and after a fight to see that the conversation in the cage contributes to a fighters mental vocabulary.

Christensen will be fighting Jesonna Ollis, a fighter from the prestigious Jackson/Wink camp in Albuquerque, New Mexico.  Greg Jackson has his fingerprints on nearly every aspect of modern MMA.  Many of his fighters have been champions (Jon Jones, Georges St. Pierre, Rashad Evans) and many a fighters toughest battles have been against Jackson/Wink fighters.  Jesonna Ollis will undoubtedly be such a test for Leann Christensen and they will compete, and converse on October 8th.

You are gonna be fighting a Jackson/Wink fighter. What do you know about her?
I don't really know much about my opponents, I like it that way. Jackson Wink is a real great boxing so that is what I am looking for. I love boxing so I am hoping it will be an all-out, three round war.

You let your coaches do the game planning?
There is a strategy behind the game planning, but I let my coaches deal with that. I worry about my training, my weight, and my progress. As far as strategy, we work with strategies that work for me and my skillset and how we can implement them.

Have you trained with anyone other than Mando Rosales?
No. I have trained with other people, not exclusively MMA. Mando's mentality is a bit more cerebral, which I enjoy. For an athlete, the majority of it is mental. If you can get yourself to practice everyday, get up super early, put in the time. Half of that is getting your brain and willing your body to keep going.

Speaking of the mental aspect. How does a loss manifest itself? Is there anything a non-fighter could compare it to?
Specifically with a fight that you lose, when you put in the two-a-days, and still work forty, fifty hours a week, it is something that you want. To lose something that you really want and have put a lot of effort into it is hard, but we have to lose before we learn to win. To be gracious in defeat and in victory. In a normal life setting? It is like a broken heart. You have a new found love, infatuation, everything is going good and strong then something happens and derails the whole thing. That is kinda what I would equate it to. But love can come quick and leave quick too so you have to get it out of your mind and take what you did, the positives and negatives, and try to turn those negatives into positives. To know that when you left the ring you left it all there and did not give up. As long as you didn't give up and went all three rounds, we can be proud of each other, that we went the distance, at least.

What made you want to fight?
I have always been a tomboy, and never really had many girlfriends. I always hung out with the guys as one of the guys, playing football. I was always the goalie, so I got used to projectiles coming my way, so maybe the next step was a punch. I like the contact. There is something very visceral of being close, punching, clinching the action of it all. It is relaxing to me. I get a lot of relaxation from it, it is my zen time. Work and life outside of here (the gym) can be very stressful but coming to the gym you knock it all out of the window and just focus on what you need to do.

Do you visualize?
Yes. I went to sleep last night visualizing certain things. I am an intense thinker and never not in my head. That is my biggest problem, trying to get out of my head. So when I am home at night I try to read, take a calming bath and focus on what I need to do. Visualizing that moment in the cage, whether it is a run down combination to a take down or if she reverses me that I end up on top. When I visualize I visualize both sides of the battle, not just me going out there and walloping, I visualize a real battle. I feel it is a bigger testament to go in there and be in there three rounds against a conditioned fighter than it is to stay there for twenty seconds and knock someone out. I would love to knock someone out but I think it is a better testament of willpower. The power of attrition to know that you went all rounds and could have gone longer if you had to.

Is there any recurring image, any symbols? Have you ever walked into a fight knowing or feeling a loss?
No, every fight I had that manifested dream, where I see one or two things that actually end up happening, but the outcome is always different. I always visualize myself winning and am praying to let me give god the glory to move through me in my fight. But whatever happens, happens. In the end I don't see it as a one sided battle, at the end of the day any person is capable of beating another on a given day. It is a matter of that day. I just pray and train for that day to be mine.

Do you have a mantra or motto?
There is a quote from Martin Luther, that Grace is ever-flowing and it is the strongest presence in our life, that is given to us and has never been earned. It is given continually and we have to show it continually. My motto in life in general is to give grace, be humble in victory and defeat. It is a test of our mental stability, to know that someone beat me up today but I won't let it beat me. It is hard and definitely something I struggle with, but that is why it is my motto. I can get better at it and move forward at being gracious and giving grace forward rather than always expecting something to come to me.

Do you think a fight is Nature vs Grace?
I'd say it is a combination of both. Obviously the nature part is me doing all of this (training). There is a japanese saying about going with things. Grace is about taking things in and giving them back at the same time. In a fight you see a punch and you go with that punch or you go with a roll, you don't fight against it, you go with it to end up in a better position. You have to train yourself through nature to use the grace effectively. In order to put it into action.