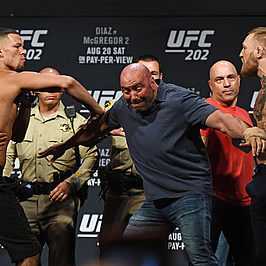 Conor McGregor has hinted at much improvement in preparation for this rematch; a 300k training camp, fighters that mimic Nate Diaz's height, and a crash course in jiu-jitsu.  What he has not hinted at is the confidence he had before, and in his breakdown at the press conference this week, we saw precisely why Nate Diaz will win.

Of course there are ways for McGregor to win, but those options are rare and require a patience and lack of ego that has yet to be seen in a McGregor fight.  What Diaz needs is McGregor to come aggressive - with something to prove - to win.

Let us be clear, Diaz has been doing jiu-jitsu since he was a teenager and took up boxing soon after.  While McGregor spars with tall guys, Diaz spars with Andre Ward, arguably the pound for pound best boxer today.  There is nothing that McGregor can learn in either of those two arts in a few months that will prepare him against a decade of fighting, scrapping and competing.

What McGregor has to do is be patient and use the one advantage he has, his kicks and his unorthodox style of deploying them. Though Nate Diaz showed significant improvement in checking kicks against Michael Johnson, they have always been his achilles heel.

McGregor cannot engage in a firefight with Nate Diaz, and he will.  And in the Diaz wheelhouse of throwing bones, Diaz can go all day.  Diaz will not tire, and will not be fazed by the two hit combinations McGregor throws.  He wasn't in the first match, and will not be in this one.

McGregor was in the greatest shape of his life for the first fight.  Diaz just came back from drinking Tequila in Mexico.  McGregor was calm, confident and a visionary of his own legacy-all until he got hit with that right and millions saw his eyes curse like Richard Pryor.  What we saw was McGregor desperate, unable to physically dominate Diaz like he had his opponents at 145, and his all-powerful straight left impotent.  It was just another punch, and against Diaz, all McGregor ever had was a punchers chance.

Saturday night the rematch will be very similar to the first match.  The difference will be how soon McGregor loses composure and when he does, will his desperation be fueled by muscle memory or ego?  One of the two is where his artistry resides, and be sure Diaz is seeking to draw out the other, as he did in the press conference.