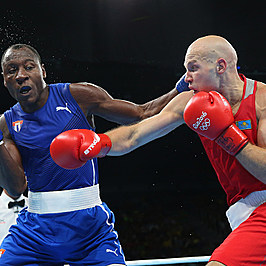 There has been a dearth of excitement in Heavyweight boxing since the 90's.  The last truly exciting time for many was the years of Mike Tyson through the Lennox Lewis era.

Much of this has to do with the dominance of Vitali and Wladimir Klitschko, two brothers who held all the heavyweight titles through most of the Oughts.  While technically masterful fighters, their cerebral style and ability to neutralize knockout artists like Chris Arreola and David Hayes did not lend itself to as much drama as Tyson, Holyfield and Lewis through the 90's.

However, there is a new era coming.  My article yesterday discussed how many of the boxing greats (Wladimir Klitschko included) started their reign with Olympic gold.Tomorrow, the Rio Olympics boxing heavyweight match is taking place between Russia's Evgeny Tischenko and Kazakhstan's Vassiliy Levit.

Levit, 28, is the dark horse of the Olympics, having defeated the gold medal favorite from Cuba, Erislandy Savon, in the semifinals.  While Levit's win over Savon was seen as controversial by some, his previous wins in the tournament were far more dominant that Tischenko's wins.  This stokes the fire of there possibly being another upset by Levit, who unlike Tischenko, was not top-seeded in the Rio Olympics.

What this means for boxing fans is both the chance to see an exiting fight pitting underdog against favorite and a chance to see two fighters who will inevitably turn pro and contest for boxing's heavyweight belts.  Typically, amateur boxing, with it's focus on points lends itself to a more technically sound style based on fundamentals that frustrates the more popular brawling style of some of boxings recent, short lived, heavyweight fighters.